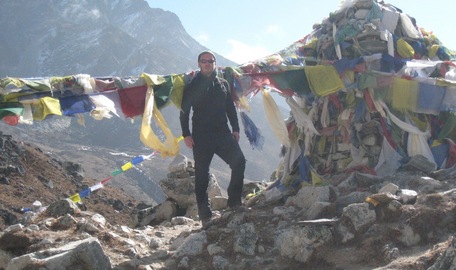 One of our fundraisers Geoff Battla has kindly agreed to share his treatment journey after he was diagnosed with throat cancer. This first part will look at what symptoms Geoff had and then what happened after that. We have decided to use the Q and A format for this and hopefully Geoff’s experiences will help others going through the same thing.

When did you first notice symptoms? What were your symptoms?

It’s difficult to be sure. I had been aware of a numbness on occasions on the left side of my face for most of 2011. I use a mobile phone a lot each day with work and often thought that could be causing the problem. There was no associated pain though so, I didn’t go to have it checked with the GP.

The only real symptom was a small lump on the left hand side of my neck, just below the jawbone. I do remember feeling this one sleepless night on a trek to Everest Base Camp in November 2011 and made a mental note to have it checked when I got back to the UK.

Of course, when I did get back and being busy with work etc, I didn’t get around to making that appointment.

Did you visit the GP first? What was that experience like?

I had a slight accident while on holiday in Sri Lanka in March 2012 where I got a pretty bad gash on my shin. When I got home, I had to see the nurse at my GPs twice a week to have the wound re-packed.

During these visits, she suggested that I have a free NHS Health Check which I eventually agreed to. At this point, I mentioned the small lump in my neck which the GP had a quick look at. They agreed to get some additional blood tests done as part of the health check which ultimately led to the diagnosis.

Both the nurse and GP were helpful and caring and outwardly expressed no great concern about the lump other than that it was worth getting it checked.

Where were you referred to?

Initially I was referred to the local NHS hospital for further blood tests. I was also waiting for an appointment at the ENT department which seemed to be taking a while. It was then that I decided to go through BUPA which is provided by my employer.

I was fortunate to be offered an appointment with Mr Vinidh Paleri at the Nuffield Hospital, who from our first meeting struck me as being warm and friendly as well as having excellent knowledge and skills to help me.

Vin was thorough in ensuring all relevant tests were arranged – CT scan, ultrasound and fine needle biopsy. He asked a colleague to take a second look at the biopsy and then arranged for a PET scan.

On 22nd June, 5 weeks after my first consultation with Vin, I was given the diagnosis of Squamous Cell Carcinoma in the left tonsil.

Vin delivered the news in a caring, sensitive and yet thoroughly professional manner. My first reaction was that I had absolute confidence in him in terms of getting a successful and positive outcome. The tumor had been caught early and it appeared that it had not spread.

I didn’t feel particularly shocked and certainly wasn’t angry. Somewhere in my subconscious I felt this was going to happen and the most important thing now was what we were going to do to beat the cancer.

I immediately felt that I had to take “ownership” of the illness and find out about HPV and the proposed treatment – again Vin was brilliant and patient in his explanations. I left his room in no doubt that I was going to be fine.

The difficult part was going to be breaking the news to my partner, parents and close friends.

We will continue with Geoff’s treatment journey in another news item. I think what we can take away from Geoff’s story so far is the importance of getting symptoms checked out if they last for a long time and how much confidence it can give a patient to have a good and communicative relationship with their consultant, like Geoff does with Vin.