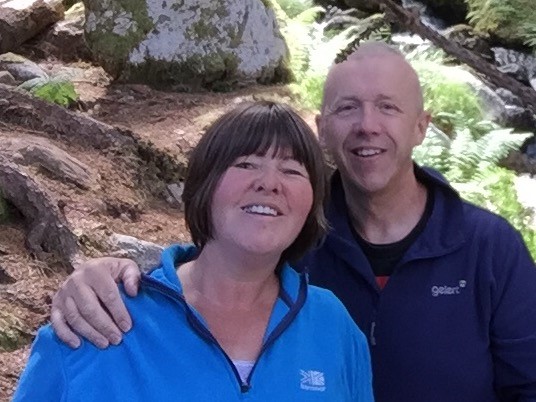 I was 53 and towards the end of February 2016 I went to my Doctor with a sore throat which he thought was ‘Classic Tonsillitis’.  However, after about 2 months and on my 3rd round of antibiotics, I was referred to an ear, nose and throat (ENT) consultant at Aberdeen Royal Infirmary (ARI).  Unfortunately, the examination revealed something more sinister; a suspicious tumour on the right tonsil.

I was diagnosed with stage 3 Squamous Cell Carcinoma and was told it was likely to have spread to lymph nodes on my face and neck.  This was a massive shock. Throat cancer is more commonly found in people over 65 who regularly smoke and drink.  I only drink on occasion, I don’t smoke, and I look after myself, so I wondered how could this happen to me?

Tests discovered the Human Papillomavirus (HPV) Type 16 had been dormant in my throat, probably for decades and which left me open to cancer.  I was advised that I had a good chance of recovery of around 70 per cent plus.

My consultant said, “The hardest thing about diagnosis is the waiting time between probability and actual diagnosis; those weeks are the most stressful.”  I’m very rarely ill, so I had a strong gut feeling about what I had.  “You don’t want to tell anyone until you know for sure.”  The result was devastating for me and especially for my wife.   When we told the rest of the family there were lots of tears and questions but, in some respects, it was a relief getting it off my chest.

Surgeons made the decision to remove the tumour during a biopsy operation.  I then had to have four wisdom teeth removed in one sitting. They must look at your dental situation, because once you have had radiotherapy to the mouth areas, any dental treatment in the future would be very challenging due to possible necrosis of the jaw bone.

Because my cancer was caused by HPV, I was offered a trial chemotherapy drug called Cetuximab which affects the signalling areas of cell growth Initially I was okay with the treatment.  However, I got a very bad acne rash all over my body, my nails and skin around them split.

So, a week later I was sitting in the chemotherapy lounge with many other cancer patients to start the first of eight, weekly chemotherapy sessions.  I was monitored during the initial loading dose to see if I had a bad reaction; they give you a larger dose at the start and it’s all calculated using your body mass, weight & height etc.  They also give you a steroid and an anti-histamine to ward of any bad reactions.

You must understand that they are putting an actual poison into your body, which has side effects, one being cardiac arrest, so it was all a bit disconcerting.  They were pumping a toxin into my body that has a ‘skull and crossbones’ logo on the bag!  It’s a very scary thought.

You are sitting there for around 4 hours, drinking coffee, munching on biscuits and Quality Street chocolates and talking to the other patients.  They obviously put you all together like that as kind of group therapy, it’s sort of reassuring, but very frightening at the same time, like you are all together going on a test run of the world’s scariest rollercoaster ride.  Everyone in the room was in a different state, of what I can only describe as deterioration.  There was expected site of bandanas, wigs etc, so I could now see what my immediate future held for me.

A week later I started my first session of 35 doses of radiotherapy to my neck and mouth area where the tumour and surrounding lymph nodes were. I was warned to expect horrific side-effects, particularly as the neck is such a sensitive area, and that I would likely prefer the treatment to stop at a later stage.

The radiographer warned me that from around week 5 onwards it would be ‘pretty rough’, that I would likely be very poorly with the combined effects of the chemo and the radiotherapy.  Again, you are sitting in a waiting room with others, along with their relatives or friends all in similar situations, you got to know these people and their plights.  Some would talk openly about their cancer, some would not rather talk about it, I suppose still in shock, denial maybe.  Some were quite open about their prognosis, hoping to live through it, or expecting to die at some point, it became a strange but easy thing to talk about over time.  I can remember asking one lady “how long she had left”, and I meant her radiotherapy treatment, but she said she was given 6 months to live!  I was obviously very apologetic, but she was fine with it, and we talked for a long time.

As the weeks went on, the combined treatments took its toll and as I was told, week 5 got pretty rough and I had to be given morphine patches to manage the pain.  My body was covered in an oozing, acne-like rash and my throat was burnt and blistered on the outside and inside.  My saliva went, as well as my taste; even drinking water felt like liquid metal in my mouth and throat.  By week six, I had lost nearly two stone and I was offered a feeding tube, which I refused, leading to more weight-loss.

Although I rarely felt nauseous from the chemotherapy, the radiotherapy caused my mucus glands to over-compensate for the loss of saliva, creating a thick, stringy drool which caused me to gag and vomit a lot.  At one of my weekly consultations with the nursing staff, she had a look in my throat but the wooden spatula she used made me gag and I proceeded to vomit. At this stage I was very down indeed, and I had a bit of a breakdown and said, “I couldn’t take any more.”  So, they got the doctor in to have a word with me as I was all for stopping for the treatment.

I had to finish the treatment, or my chances of recovery would have diminished.  As my consultant said, “I couldn’t go back and finish it later.”  He said that despite the poorly state I was in, I was fit and healthy enough to get through it.  It was a bit of a pep talk, even the other patients noticed what a bad state I was in and tried to reassure me.  My wife Heidi gave me a stern talking to stating I had a lot in the future to look forward to; she’s been an absolute rock during all this time, and although I knew it was very hard for her emotionally, she was my driving force moving forward.

Thankfully, 3 months after the final treatment, my scan and camera check showed no sign of cancer.  I was elated when I heard the news from the oncologist but could not help asking, “Are you sure?” And, “How can you really tell?”  He said there was no detectable sign, but that I was to be checked every 3 months.

My family were relieved, and a massive weight was lifted off everyone’s shoulders.  I am still relieved but, and I’m sure other cancer survivors would agree, you’re always looking over your shoulder.

Early on during my experience, I had decided to find out as much as possible about my cancer and treatment.  While I was being treated, during a stay at CLAN Cancer Support in Aberdeen, I talked to other patients and discovered that many people preferred not to focus on their illness.  I wanted to know everything about what was trying to kill me, also what the treatment was doing to my body. For me, I wanted to know about the enemy that was hell-bent on ending my life.  Knowledge was the weapon that helped me look ahead in a positive frame of mind.

I will always speak highly of the NHS who responded to my illness as efficiently as possible.  From the moment I went to Forres Health Centre, despite seeing three different doctors, everything was dealt with fairly quickly.

I only had to wait around ten days for my hospital appointment and my GP phoned me several times during my treatment to see how I was doing. The staff at ARI were fantastic, so caring and professional, and my post-treatment has also been positive.  The other cancer support in Aberdeen has also been awesome, including Maggie’s Centre and the CLAN where my wife and I stayed for seven weeks.

I run my own business, and this obviously presented a worry, but my daughter, who works for me and my two other employees fairly stepped up to the mark and allowed me to concentrate on getting better.  Many people who are fighting cancer are also presented with a financial dilemma, many employers don’t pay full sick pay.  Some patients like me had to travel far to get their treatment. So, some employers need to wake up to this fact and be very mindful of what that person and family are going through.

Having beaten cancer, partly because of this positive attitude, I am still managing side-effects including dry mouth.  Early on it was a bit sore when I ate, and I also had mild lymphoedema on my neck due to damage to my lymphatic system, but this got better.  I’m still self-vigilant; it’s a bit scary looking at the smallest lumps around my neck, but I must check.  I’m back training at the gym and I’ve put all my weight back on. I’m certain my physical fitness helped me through it.  I want to make sure I’m ready should cancer show its ugly mug again.

I’m fighting fit again now and living life to the full.  I attended Cardiac rehab fitness classes to get my mojo back and this was a massive help in my post recovery.  It’s been 2 years now since my last treatment and I feel really well. 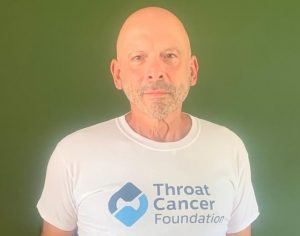 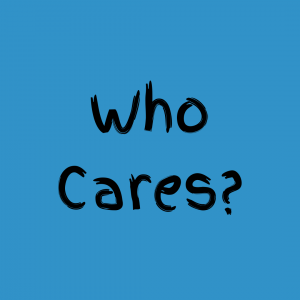