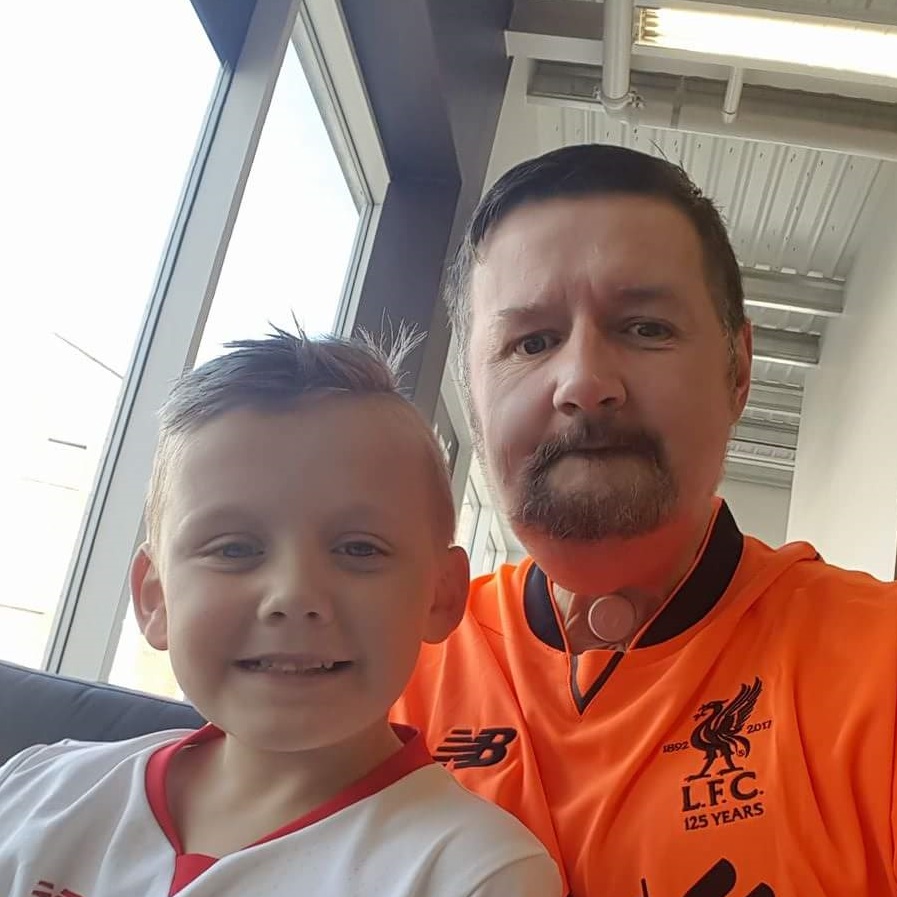 In February 2014 I started experiencing earache, so my doctor prescribed antibiotics, which I took for a few months hoping they would clear it up.  They didn’t, and the earache returned so the doctor then referred me to my local Ear, Nose and Throat (ENT) department.

The week before my appointment I found a lump on the right side under my jaw line almost in my neck.  At the appointment I pointed out the lump.  They asked me to come back that afternoon to do a needle biopsy on it.  They also booked me in for an MRI scan to look at the lump a little closer.

A couple of weeks later I was called back to discuss my results.  The lump in my neck/jaw line came back as benign.  However, the MRI showed up what looked like a tumour in my tongue.  I was told they needed to do a biopsy on it to find out if it was cancer.  I had the biopsy and the results came back inconclusive and so I needed a second biopsy.  That biopsy results came back and it was confirmed that I had a cancerous tumour in the left side of my tongue base.  The tumour had been pressing against a nerve which was causing the earache.  I have never smoked, and I do not drink much so I was confused about how I got the cancer.  Was it just one of those things?

The biopsy had been tested for the Human Papillomavirus (HPV) and it had come back positive.  I was forty-two years old and this was the first time I had ever heard of the HPV.  So, began weeks of meeting consultants and medical professionals.  I would require six weeks of radiotherapy and chemotherapy.

Before my treatment could start, I had to visit the hospital dental team to see how my teeth looked.  As my teeth were not in the best condition, they said I would need dental clearance (removed all but six front teeth) to prevent problems in later life.  I had the dental surgery and then I was sent to the radiotherapy team to get my face mask (to enable the radiographer to give me treatment in the correct area) constructed.

During this time there were various MRI, CT and PET scans and then the radiotherapy and chemotherapy began.  Two weeks into my treatment it was decided that I was losing too much weight, so I was fitted with a nasal gastric feeding tube.  I had not really taken in how serious my condition was or realised how ill I was going to feel.  Denial, I guess?  I was constantly tired, could not move far and for twelve hours a day I was hooked up to a pump feeding me constantly via this tube.  I hardly ate or drank anything towards the end of treatment.  But by the 12th of December 2014 my treatment had finished.

The week before Christmas I was not feeling well at all.  Too ill to go to doctors, so on Christmas eve a doctor came out to me.  The doctor prescribed me antibiotics for a chest infection and organised a nurse to come out to take blood samples.  Boxing day night I started to get worse, I vomited and there were traces of blood in it.  My wife called an ambulance and I was taken to A&E and ended up staying there all night.  The next morning after running various tests I was admitted to a ward and eventually sent to a private room.  I had neutropenic sepsis due to my immune system being compromised from radiotherapy and chemotherapy.  I spent a week in the hospital on antibiotics and fluid drip.

As the months went by my health started to improve, I was eating and drinking small amounts and had stopped using the feeding tube.  In March 2015 my feeding tube was removed, then in April 2015 I had a biopsy on my tongue to see if there was any kind of cancer.  The results came back and I was told there was a lot of scar tissue from the radiotherapy but there did not look like there was any sign of cancer.

Now my recovery was starting to happen.  I had regular check-ups with the ENT team and was referred to the speech and language team to help with my swallowing, because the radiotherapy had caused a narrowing of my throat and I found it difficult eating certain things.

Then in May 2015 I had surgery to remove the lymph nodes from the right side of my neck as a precaution.  I was informed this was standard practice.  I was also referred to the psychology department as I had been struggling emotionally with everything that had happened.

As my recovery progressed, I was then referred to the maxillofacial reconstruction team to be fitted with false teeth.   Regular checks followed and my recovery was going well.

By August 2015, I started to feel earache again.  I mentioned this in my check-ups in September and November.  By the time my January 2016 check-up came around the pain was starting to get worse.  I was sent for a laser guided biopsy on my tongue.  The results came back and as I suspected there was cancer!

At the appointment with the consultant, I was given 2 choices.  Firstly, a total glossectomy (complete removal of tongue) and a total laryngectomy (removal of voice box) and that I would need to have my windpipe repositioned to breath out of my neck.  They would take fat and muscle from my leg to reconstruct the floor of my mouth.   I would also require a PEG feeding tube as I was told I would not eat again.

My second choice was to receive palliative care and be made as comfortable as possible for however long I had left.

At this point I am just about to turn 42 years old with a young family; three kids, aged 5, 10 and 15.  No other choice, I needed to do the procedures to stand a chance of spending more time with them and my wife.  So, on April 26th, 2016, three days after my 42nd birthday I began for the surgery.

The surgery lasted around fourteen hours. I was in hospital for two weeks while I recovered from the surgery.

Fast forward 2 years.  I am now 2 years post op and slowly recovering.  One of the main positives to come from the last 2 years is I can swallow liquid and soft food and I have since had my PEG tube removed.

Over the last 2 years there have been so many more issues and things to deal with than just the operation.  My mental health suffered, I continue to see a psychologist and earlier this year I was diagnosed with PTSD.  I also suffer with anxiety and depression.

My general health suffers a lot too.  I suffer with frequent chest infections and virus (currently on antibiotics for a chest infection as I type this).

I have had surgery every 6 months since the main operation.  These have been to stretch my throat to help me to swallow as my throat is very narrow.

Daily there are issues I face; communication is a huge problem; it gets easier in time with my family.  However out and about not so much.  My anxiety flares up while out.  I talk to my family with text to speak app on my phone.  When I am out with them, I text and show them (I do not use the speech part).  The same when I must communicate with people in shops etc.  I type and show.  I have had people ‘tut’ behind me in queues because I am holding them up.

I cannot complete everyday tasks like making a call to make an appointment or sort a problem.

My wife helps by doing this for me.  I find it difficult dealing with people who stare.  I cannot eat in public.

I am tired often and by 2pm most days I am worn out and by 7pm in my bed.  I can’t walk far before I start coughing.  If I am walking against the wind, it can catch my breath by catching the laryngectomy tube in my breathing hole.

My left leg aches every day as the day goes on.  This is where they took the fat and muscle from to reconstruct my mouth.

Not only am I going through this but also my family.  Everyone can become frustrated.

The main positive to come out of saying yes to the operation.  The thing that keeps me going, the thing that trumps all the above.  Is having extra time with my family.  Had I not had the operation I doubt very much I would be typing this now.

All this due to cancer of the tongue caused by HPV.  Had I been better educated and if the vaccine had been available to me when I was younger then maybe I would not have had to go through all this.